From DIY ethics to athleticism – how roller derby continues to #PressForProgress 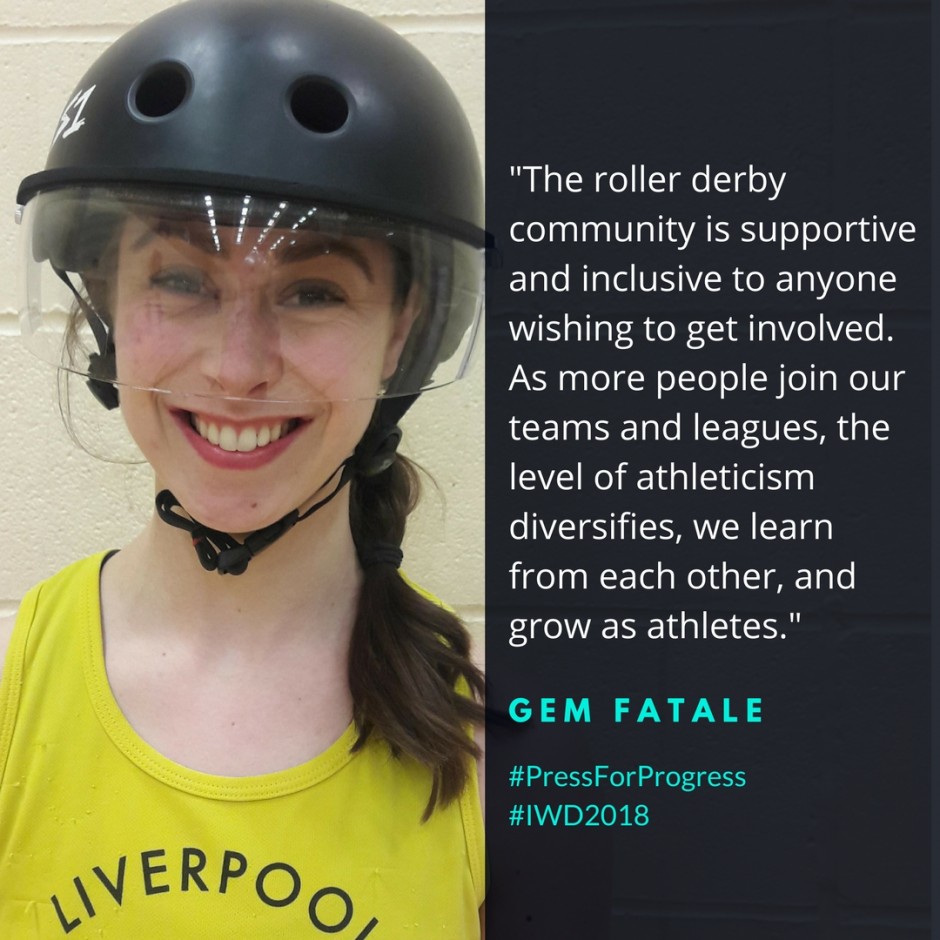 Every International Women’s Day makes me stop and think of all the things I take for granted. All the things other women are not able to do because they don’t have my position of privilege. I always wonder what would be different for me (a roller derby player) and my daughter (a dancer) if we wanted to pursue our chosen activities in another country, if we weren’t white, if we were from a different social economic background. We are so lucky that we can pursue our passions. We’re so lucky that we can be part of a culture and generations that can affect change for other women and girls. I might remind my kid of that later actually!

Roller derby is a sport that is able to be progressive on its own terms. It’s brilliant to be involved in. We are writing our own rules and we’re creating this sport as we go along, which is wonderful. 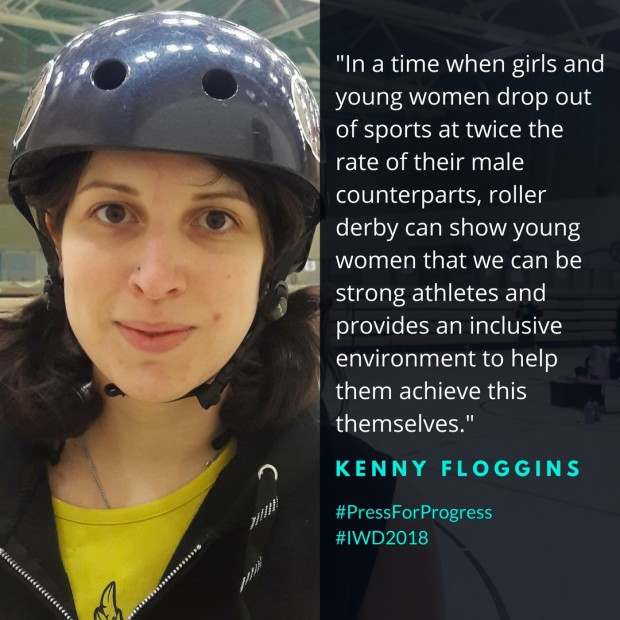 From DIY ethics to athleticism

This year’s theme, #PressforProgress, makes me think of how far we’ve come already. As a league, Liverpool Roller Birds are evolving towards an ethos of professionalism, athleticism and progress that is becoming more and more the norm in roller derby. Many leagues are now leaving the old roller derby features behind and moving towards more serious, competitive goals. At LRB this has meant losing bout themes, wearing a uniform made for sports, cross-training and nutritional awareness. I believe that if we want to compete as athletes we have to act like athletes.

There’s nothing wrong with anything roller derby has been though. It’s all part of a DIY ethic which I have always loved and will always be important – and as with all sports, it should be available to all. There’s always going to be levels of play where anyone can do it. It feels like we’re at a real critical point in the sport now though where we’re getting amazing national coverage, we can prove we can hold large scale events and at its highest levels, the athleticism of the sport can not be denied.

Women in sport – representations in the media

Watching the World Cup was an example of how far we’ve all come. Having the World Cup final shown on the BBC and seeing positive stories and articles about the event was amazing. Though still for every positive there were still 10 negatives (never ever read the BBC sport twitter feed!) and it just proved that sports made and run by women have such an uphill battle in terms of respect. We’re out there and we’re doing it and we’re being properly brilliant at it – but it’s still not enough for the world. Which is why it’s still so important to press for progress (see what I did there?!) for women in sport.

We’re lucky in a way that our sport is still pretty niche and were all involved in making it up as we go along. But you only have to read a newspaper to know women in mainstream sports are criticised in a way that men just aren’t. Every Wimbledon the first thing people say about the female athletes is about the noises they make when they’re playing. Well, Barbara, if you can hit a tennis ball at 60mph without letting out a peep then I’ll give you a medal! Female athletes are still subject to less airtime, criticism over their appearance and outright disgusting commentary from male pundits. Women in management in sport are overlooked for their male counterparts despite being more qualified. Women get paid less than men still. There are small changes and progress is happening but it never feels like enough. 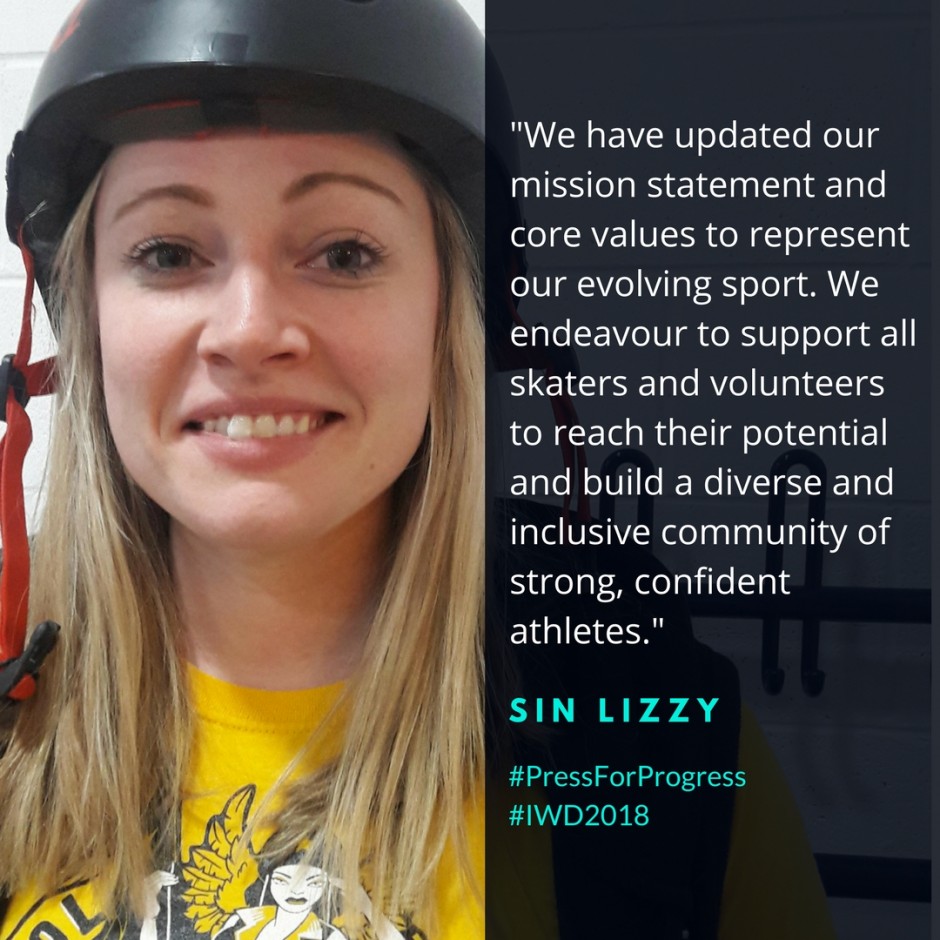 Striving to be inclusive

This year’s IWD theme feels like it’s made for roller derby. We’ve always been pressing for progress, but when I think about us as a league I know we could press a bit further. We’re trying so hard to be inclusive and make sure our gender policies and outlook are better. We try but don’t always get it right. We need to be better for our gender expansive and trans friends. We need to do this because it’s the right and decent thing to do but also because our mainstream counterparts don’t.

We need to be better at including people with disabilities. We train at a facility that has its own disability sports and activity programme and is accessible. We need to make sure we’re accessible for people of all abilities.

There’s still so much to do for women in sports. With roller derby, I think we are doing something really unique and eventually I hope our sport will be used as an example to others in the mainstream and be a positive influence for women in sport.