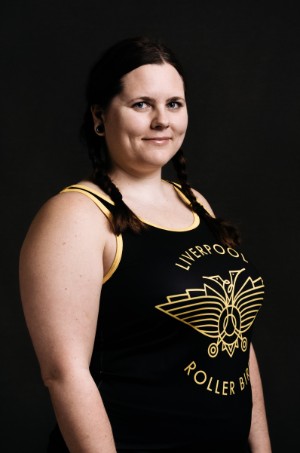 I played my cherry popper in November 2011.

Why that name and number?

My derby name is a homage to my home town of York. Eric Bloodaxe became the last Viking King of York in 947AD. Eric originally became the king of Norway after the death of his father and had four of his older brothers killed in his bid to keep the crown. But he was ousted by his younger brother and came to Britain where he was made king of Northumbria-which included the Kingdom of York. From 947AD to his dethronement in 954AD King Eric had many battles with the English Kings and contemporary accounts paint Eric as a murderous tyrant whose savagery was shocking even by Viking standards. When Eric was expelled in 954AD, York and Northumbria became part of a united Anglo-Saxon Kingdom and Viking rule ended forever. As for Basha – it’s a girl’s name of Polish origin meaning ‘stranger’ which I thought was pretty apt for a derby player.

Playing a team sport and being part of a great,  strong group of people.

What is you proudest achievement?

Playing against Rainy City and winning after a lot of losses with the A Team. First time I felt emotional after a game!