Here’s CubLa Khan from Liverpool Roller Birds to tell us about the Birds’ triumphant win over Rainy City Roller Girls Tender Hooligans on Saturday 6 October – our first A team win of the 2012 season!

I get out the wrong side of the bed. For some skaters this means their body checks will be propelled by raw aggression, possibly they’ll be a bit mouthy, a bit cocky: no bad thing if controlled. For me it means I will spend the day quiet, slightly afraid and close to tears. I will skate timidly and lateral without conviction. I’m worried I will be ineffectual. I’m not sure why I’m rostered, I’m not convinced I’m good enough. I’m like a prey animal, only without the benefit of good peripheral vision and long legs, and there are predators at large.

I’ve been bouting for a little over a year and a half now. My bout routine has changed somewhat during this time. I used to spend longer on my make-up and paint my nails, glitter was important. Now I mostly focus on my packed lunch and memorising tactics.

We arrive at Rainy City’s venue: The Thunderdome.  The hall has a warehouse feel, low ceilinged, concrete floored.  The walls are painted with Rainy’s emblems: clouds and umbrellas in cutesy pinks and mauves with bold yellow lightning strikes.  It occurs to me that this is the colour scheme of bruises.  This hall suits my mood.  And it’s cold.  So cold.   Suspended from the centre of the ceiling is a single modestly sized disco ball.  The venue is seedy, intimidating and raw.  I recall strip lighting but now I’m not sure if I imagined it.  It’s reminiscent of a David Fincher film and I joke to Ceelo about the appropriateness of the place for a cinematic murder, the harsh lighting chillingly indifferent to the violence it would illuminate.  If a building could be fish-netted and black-eyed it would be this place.  It is female.  It is dangerous.  It is roller derby.

Devil Mae can tell I’m out of sorts (we were friends before skating, she knows). She gives good hugs and we huddle for warmth. I’m starting to feel better. I’m part of this team. I know what I’m doing… mostly.

Rainy take an early lead. I’m played on the third jam and I find myself one of only two LRB blockers left on track during an opposition power jam. Rainy are playing the ubiquitous sausage/train/patient offence and Devil Mae and I attempt push-pull blocking together. I can feel we’re both too tense, our arms are rigid and our feet are too static on the track. Devil Mae is panicked, I need to be more authoritative but we’re both like bunnies in the headlights and there’s no time! Our defence is mowed down by the jammer, once, twice, three times, maybe more. The jam seems to go on forever. We feel inadequate, though no one criticises us. The bench greets us with sympathy. I love this team, they’re kind.
The Tender Hooligans are fielding blocky packs. They man on a lot, their tactic seems to be to cause chaos. They favour the back line and scrum starts. None of this should be a problem but something’s not right and we’re letting them fluster us. By the end of the first half they’re about 50 points ahead. 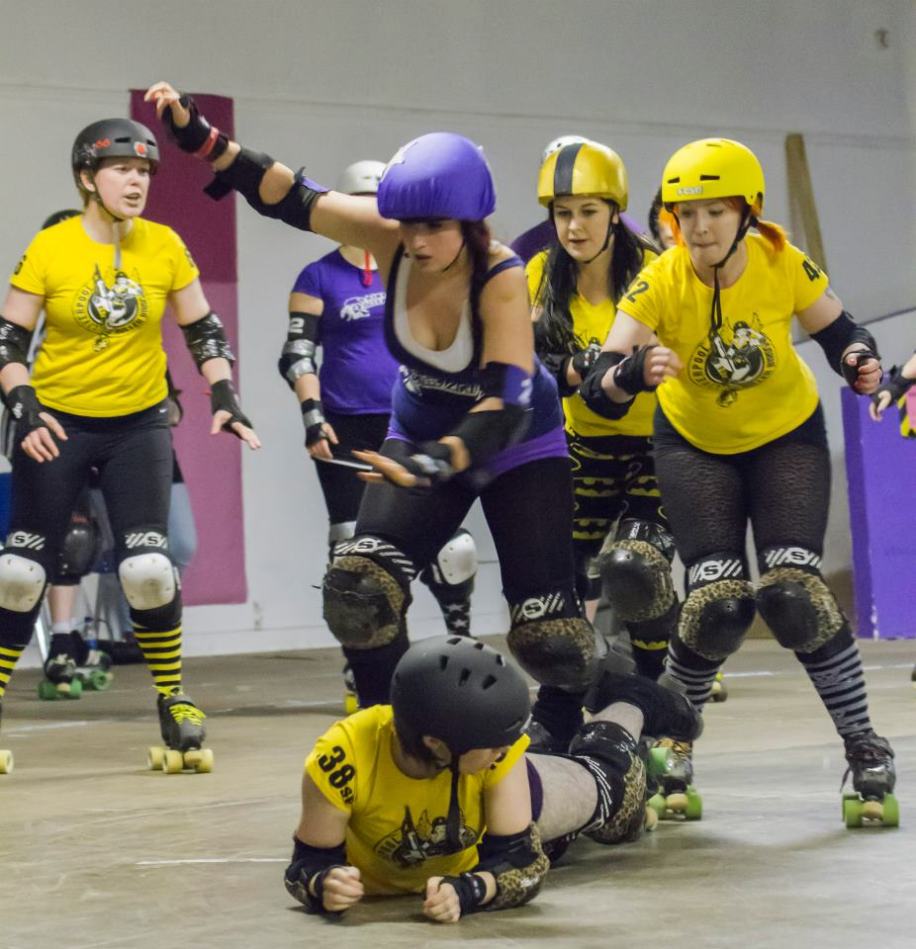 LRB have a pattern. We can take a while to warm up in a bout situation but we’ve a history of coming out swinging in the second half. We know we’re only a couple of power jams away from being able to take the lead and we don’t give up. Not ever. I won’t say I’m feeling better by this point, but I’m skating better, I’m more focussed and I’m more communicative: we all are. Our jammers are spectacular: tenacious contortionists with great stamina. I’m in awe. We’re creeping ahead! Metal Alchemist is chasing down the Rainy jammers, we’re bridging effectively. Holy shit! I think we’re going to win. We make some mistakes. Atomic’s frustrated with us. No one minds: when Atomic tells you to do something it’s because you should be fucking doing it. The atmosphere is immense, electric. The crowd are screaming, every jam could bring a change in the lead, the tension is almost unbearable. Between jams my eyes dart frantically from track to scoreboard to track to penalty box to scoreboard…

The final whistle goes. The scoreboard says we’ve won, but the scores have to be confirmed and it’s still unofficial. We’re not sure what to do. Our celebration is delayed while we process what just happened, huddled together, grinning maniacally. Is it real? We did it? We did it!

WE DID A WIN! The final score is 170 to 144. We score approximately 3 times as many points in the second half as in the first half I think. Joy is unbridled; we’re crying, screaming, laughing, hugging. We hug the Rainy girls, they were tough opponents. WE WON! I’m not sure we can believe it. It feels nice.

I don’t know why I had no confidence that day and I know I can do better than that. Thankfully I was skating with thirteen other amazing women. The team is more than the sum of her parts and my negativity was overwhelmed by the positivity of my teammates. Yellow’s not just a colour it’s a state of mind and there’s always enough of that to go around in LRB.

BOOM! Bring on the next bout! 😀

See our B team, Liverpool Roller Birds ‘Chicks’ in action on Saturday 20th October when they take on Munich Rolling Rebels – check out our website for more details and to buy tickets! 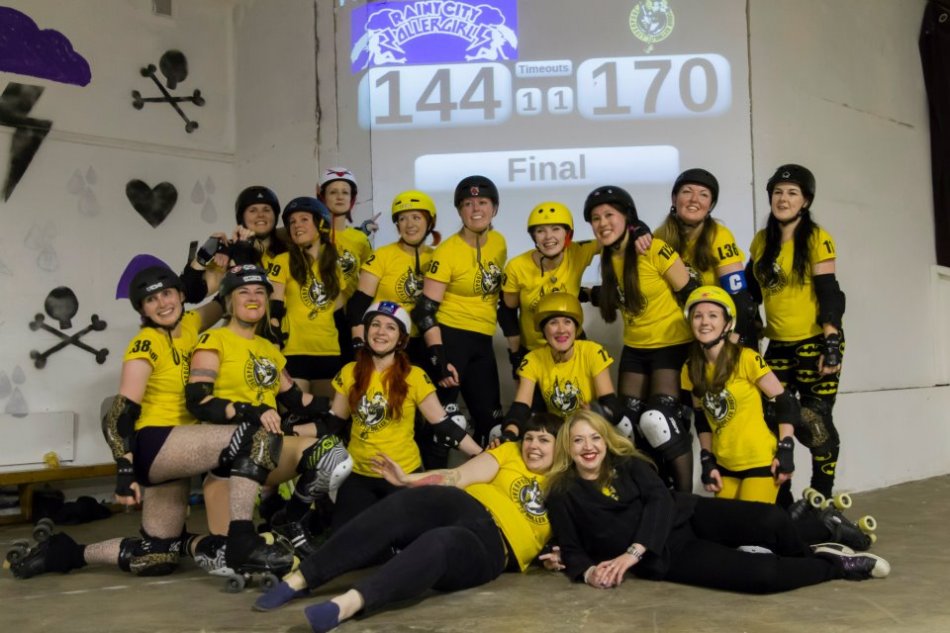 Thanks to Darren Crompton for all images.