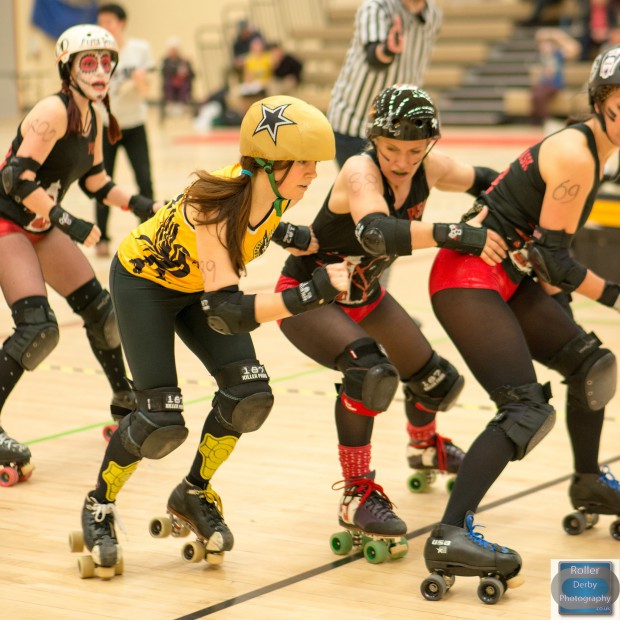 Ok, so you have been skating for a few weeks now, you have purposely fallen on your knees, balanced on one leg and tried to “cross over”.

You have a collection of fine bruises and get ridiculously excited at the mere thought of having wheels on your feet.

You spend your days counting down the hours until your next skate session and you already have numerous derby names ready for when you pass your minimums skills.

Yup, you well and truly have the derby bug.

Today we are going to look at the world of Roller Derby Vocabulary, yeah that’s right, its so cool it has its own little language!!!!!

Here are some words and phrases you may soon come across.

Announcer.
The delightful folk who announce both teams at the start and give the commentary during a bout.

After Party.
The glorious party that follows the Bout.
Optional drinking, partying, dancing, possible falling over, generally having lots of fun with you fellow team mates and Derby Family, Nso’s, Ref, Opposing team, and anyone else you can drag along 🙂

Blocker
A non point scoring skater in the pack.

Bout.
This is what we call our “games/matches”

Bout day is what all Derby girls look forward too.
Bout is also used to describe the act of playing Derby ” Bouting”

Boutfit
A boutfit is the OUTFIT you wear for a bout ( or training session). Gold knickers, sequins, stripey socks, plain black, bit of leather, yellow spandex!
Your boutfit can be anything you so wish, let your imagination run wild.

Counterblock.
A glorious block, wherein your opponent thinks she is about to block you into next week, but instead you counter block her, sending her reeling or preferably to the floor!

Cut the Track.
This is an illegal movement, were a skater, skates out of bounds and returns to the track in front of an opposing skater, therefore bettering their own position.

Derby crush
That skater that makes you go all giddy and giggly.
You want to skate like her, you admire her, you may even want to kiss her, she is all of the awesome and just so damn cool.

Derby Widow.
This is one you will all more than likely come to know very well.
Your significant other is left behind, lonely and sad that your life is now totally dominated by derby. Tell them to sign up, become a referee, an NSO or a cheerleader for this is the only way they will now get to see you.

Derby Wife.
The special someone you have gained a special bond with in your team.
Your derby wife will be there for you through thick or thin. she picks you up when you are down (literally) and understands you like no one else.

Derby stance
In your career as a Derby Player, this is probably one of the things you will hear most ” DERBY STANCE”. When you first start out, this makes your poor thighs ache and the thought of standing like that any longer makes you wince, yup if that’s how you’re feeling, you are doing it right!!!

Fresh Meat
All new skaters who are in training to become a full blown Derby Girl.

Inside Line
The inner line on the roller Derby Track, never leave this wide open, opposing jammers use this to their advantage if you do!

Jam
Multiple meanings.
Two minute sessions in which the two teams try to score points against each other.
The sessions that make up an entire bout.
To jam, to play the position of the Jammer.
Jam, a delicious fruit confection.

Jammer
The player on the team with the Star on their helmet.
Her goal is to break through the opposing wall and score points to win the jam.

Lead Jammer.
The first jammer to legally skate through the pack.

NSO
Non skating official. They do many wonderful things, keeping track of time, penalties, scores and so on.

Panties.
No not a pair of knickers , these are the names for the covers that the jammer and Pivot use to distinguish themselves from the rest of the team. Star for the Jammer, stripe for the Pivot.

Penalty box
The place you go when you have been a naughty, naughty girl. 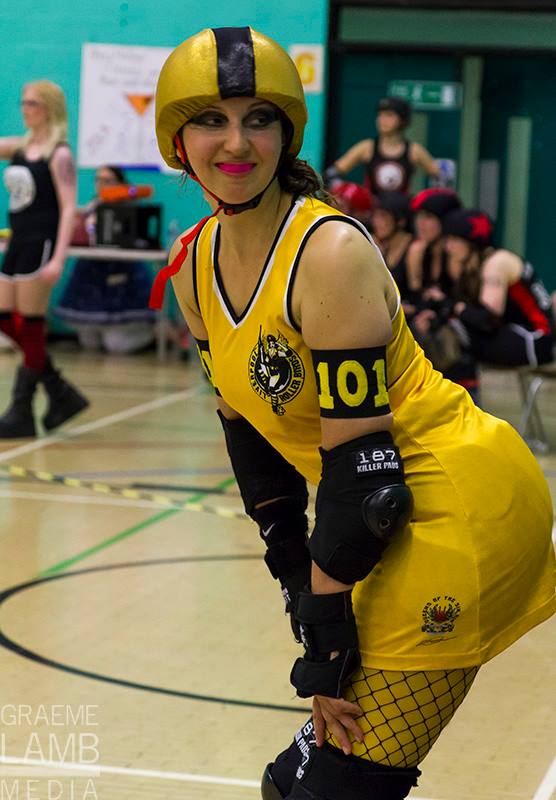 Pivot
The player with the stripe on her helmet.
She can accept the jammer’s star ‘panty’, become the jammer and start scoring points!

Power Jam
A Jam in which only one jammer is on the track.

Ref
The folk in black and white stripes.
They make sure we pay the game fair and make the official decisions.

Sticky skating
Also referred to as Lemons.
This is where you keep both skates firmly on the track and make a shape like lemons with your feet in order to propel yourself forward.

Team
Your fellow skaters. Usually made up of up to 20 skaters who bout and train together.
The team exists within your league and there can be more than one team, usually A+B teams, but sometimes more.
Note: Only 14 Skaters are rostered to play at a bout.

The above are just a few of the many words and saying that are regularly used in Roller Derby.

Here are a few of our teams favorites.

“Ass to Vag “
When you put your bum in the area of someones uh-hum “lady parts” in order to block them. also know as “sitting on them”

“Gotta Goat “
Trapping or holding back a skater from the opposing team to gain an advantage.

“Eat the Baby”
Jammer on Jammer blocking, were your force a jammer to be reabsorbed by the pack.

“No pack, Pack is here”
When a pack becomes split, causing a no pack scenario, ref will call no pack, and skaters must reform a pack as soon as possible or possibly get a penalty

“The bigger the Ass, the harder to pass”

Hope you have enjoyed our little exploration into the world of Derby Speak, you’ll be talking like a Derby girl in no time at all.