We said it was time to bring the grit and glitter to the track and we totally did!

We had loaned David Bowie for the day (AKA LRB’s referee Centurion) we’d covered ourselves in glitter, donned the sparkly shorts of awesome and Glam Block was good to go.

Our first bout of the season, a double header featuring LRB’s Chicks vs. Preston Roller Girls and LRB A vs. Rainy City’s Tender Hooligans.

The usual queue was forming before the doors opened, or so we thought. The queue was never ending, people came in and we filled the bleachers and the suicide seats and still they came. We looked around. We’re gonna need a bigger boat! So we got emergency seating and emergency suicide seats and we crammed everyone in. It was amazing, seeing so many people turn up was awesome and the atmosphere was there from the start, it was obviously going to be a good one.First up was Preston Roller Girls vs. LRB’s Chicks a close game, really really close!  The first half saw the scores at half time at 96 to 72 for LRB. Second half saw some awesome jamming from Blossom Kill seemed like everyone who tried to block her ended up on the floor. Amazing stuff, with LRB pinching the lead and winning the game 207 to 170. Well done Chicks!

This was also the lovely Bella B Flat’s last game with the team; she’s hanging up her skates. We’d planned some suitable embarrassment at half time for her, the incredibly talented Killa Mandjaro made her a fabulous cake and we handed her a bunch of flowers to send her off with some love. You’ll be missed Bella!

Half time also saw some hairdressing. Sissy Breakneck shaved her head for charity, raising over £500 for The Whitechapel Centre and getting a lovely round head in the process. The Whitechapel Centre is also The Birds charity of choice for the season, all our raffle proceeds going to them to help them with their brilliant work.
You can donate to Sissys Brave head shave here!.

So the second game of the day, LRB’s A team vs. Rainy City’s Tender Hooligans. This promised to be an interesting and tough game after the birds win at The Thunderdome last season but I don’t think any of us expected the excitement it brought.  Again a really close game throughout, half time saw Rainy leading 105 to LRB’s 78. The second half was so tense and so loud! Being a local game, Rainy’s fans were out in force, making a hell of a noise to support their team, LRB’s locals also giving it some. 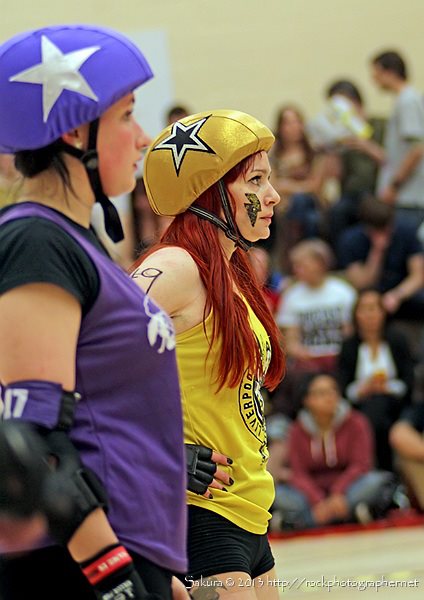 The last couple of jams were neck and neck. It was ridiculously exciting, eye popping, bum clenching stuff, sitting squeezing my kid in anticipation, listening to Cee Lo’s mum scream her on as she donned the star during the last jam. It was almost too much to watch. The last whistle blew and nails were bitten while all the points were counted and the scores verified. We knew it was a close one – final score Rainy City 174, LRB 170. FOUR POINTS!! Absolutely brilliant stuff. The Birds fought a tough one, Rainy brought their top game and it made for an amazing day. 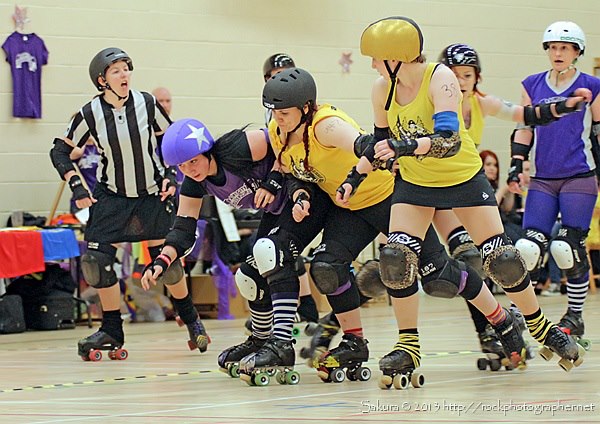 One of those ‘When can we do this all again’ type days.

Well, not long till the next one: A Blockwork Orange – Lincolnshire bombers/LRB double header on 18th May.

See you then my little droogies 😉

A Blockwork Orange…….click for more info!!!!