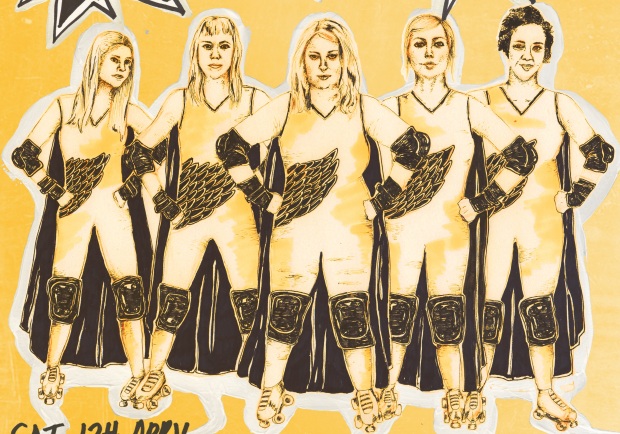 We’re getting really excited about our upcoming ‘Superhero Slam’ bout on 12 April – with The Amazing Spider-Man 2  and Captain America: The Winter Soldier both showing now, there’s superhero fever everywhere.  It got us thinking about the startling amount of similarities between roller girls and superheroes. Seriously – we’ve come up with ten reasons! Let us know if you can think of any more…

1. Wearing your pants over your tights
This is an easy one, right? Roller derby is possibly the only sport where rocking up for a game wearing a pair of holographic/sequin/animal print (delete as appropriate) shorts over your leggings is totally normal. Many superheroes go into battle wearing pants over their tights and so do we! 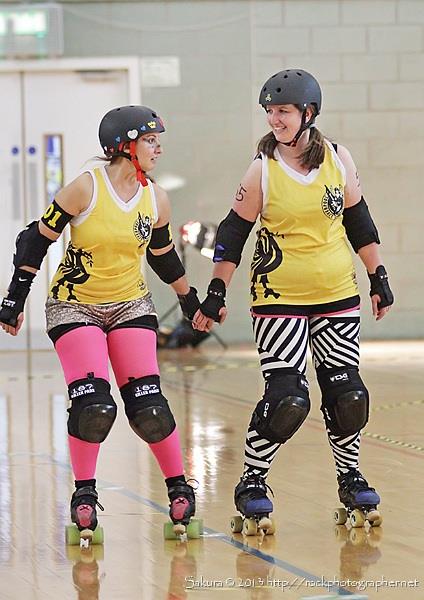 2. Alter egos
Selina Kyle was a mild-mannered secretary by day and kick-ass anti-hero Catwoman by night. Some roller girls use their derby name as a way to switch over from their every day lives and to get into ‘derby mode’ to bring out a different side of themselves on the track. Others just like to have a derby name as it’s a fun part of derby culture. In our league, Erika becomes Grace Bones and Fiona becomes Faytella Tracktion. Whatever the reason, roller girls love a good alter ego.

3. Being accepting of misfits
Dr Xavier brought together a raggle-taggle bunch of ‘mutants’ to create the X-Men; outsiders, all with their own special skills to bring to the party. It’s safe to say that roller derby mirrors this idea, with its all-embracing ethos. For smaller leagues anyway, the idea that you will be welcomed to take part, whatever your age, size, fitness or ability, still remains. Ask Liverpool Roller Birds skaters about this and some will say they’ve finally found a community where they feel accepted. Many will tell you they felt they were rubbish at sport at school and hated P.E. yet fitted right into this team sport. Misfits assemble, you are roller girls now!

4. Discovering ‘special skills’ you never knew you had
Coaching new skaters is ace because you start to see them discovering new stuff about themselves. What starts off as “What’s that now? You want us to hit each other?!” becomes “I can’t believe I’m the last one standing in Queen of the Track!” And that’s awesome. If they also discover they can conjure up lightning like Storm or crawl up walls like Spider-Man, then all the better.

5. Putting together teams made up of different super-powers
Nick Fury had the difficult task of putting together The Avengers. Coaches have the tough job of choosing the right roster for a bout. Both know that the best way to create a team is by choosing people with different skills that fit together to form the strongest line-up possible to take into battle! Who’s a good communicator? Who is great at strategy? Who’s a good positional blocker? Who’s a fast and feisty jammer? Who keeps a cool head on the track? Who’s a solid and reliable team player? EVERYONE has something to offer and bringing all these different skills together makes a strong roller derby team!

6. The ability to fly
The Pegassist. That is all.

7. Having an arch-nemesis
In our league at least, there tends to be certain blockers or jammers that skaters dread lining up against each week at scrimmage because they’re SO GOOD. But unlike Batman facing off against the Joker, this is a healthy and respectful  feeling. Admiring the skills of others helps us to step up our game.

8. An aversion to kryptonite
Well, not exactly. Superman had kryptonite, but I reckon every roller girl has had one aspect of roller derby that has caused them to crumple to the floor and groan “Nooooooooo!” at one time or another. For some it’s doing 27 laps in 5 minutes, for others it’s taking a strategy test or facing a drill where they have to get hit. A lot. Derby is full of challenges and we all have our own personal kryptonite. We just need to find a way to overcome whatever it is** so we can become the super roller girls we want to be. (**Superman used lead to protect himself from kryptonite – that’s right, I’ve done my superhero homework!)

9. Helping your community
Superheroes exist to be ‘saviours of the universe’! While we can’t really say we’ll be able to do that, being in a derby team is not just about skating, it’s about working together and running the league. Part of this for Liverpool Roller Birds is supporting a charity each year, to give something back to our local community. In 2013 we partnered up with The Whitechapel Centre, which helps homeless people in Liverpool. It was great to support a charity that does such a lot for the city.

10. The 360 degree spin
A roller girl needs an arsenal of skills in her (moisture-wicking leggings) pocket and the 360 spin is a beauty if you can pull it off – great for jammers escaping from a block. Always a crowd-pleaser! Wonder Woman used to do this to transform herself. But could she do it on skates? I think not.

One thing that roller girls don’t have in common with superheroes is their skill at putting on an awesome party (ever noticed how something terrible always seems to happen when Bruce Wayne has a fancy ball at his gaff?!)

Our ‘Superhero Jam’ band night will follow our home bout, where there’ll be live bands and a DJ from midnight. Check out our Facebook event to see what superhero songs will be on our playlist and to buy a combined ticket for the bout and after-party.