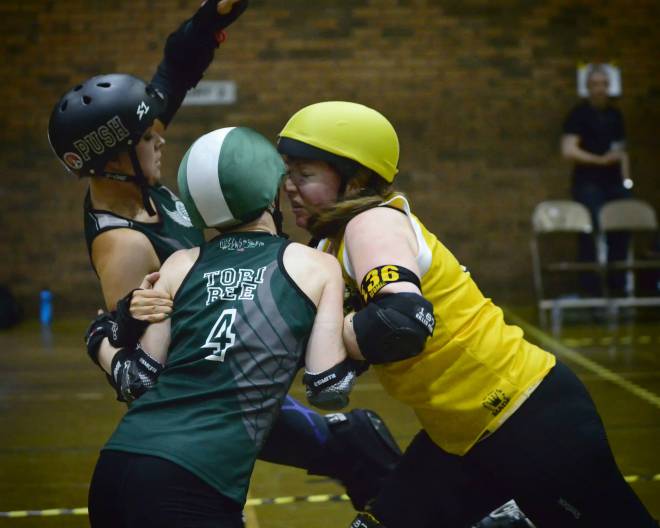 We traveled over to Manchester to see our mates at Manchester Roller Derby. Our A team were playing

their A team, The Checkerbroads. We’re frenemies, but not really, well just for 60 minutes once a year.

These guys were serious.

Hades Roller Boys. We’d had the chance to see Chaos Engine play recently at the

playing. We all love Jim Jams, so we were cheering on Chaos Engine. I could only

get my child to spend time with me that day with the promise of Jim Jams. We’re all

mega fans of his awesome footwork and his ability to outrun everyone!

So some good gentlemanly bashing aside, The Birds were ready for action. Led by

newly appointed captain Yolanda B. Cruel, it was a formidable line up of amazing

ladies. But of course The Checkerbroads roster was equally formidable. So it was set

to be a great game.

Atomic Boom. This is how she hits us at practice, too!

Last time these two played MRD took a decisive win of 273-80. The Birds had been

training hard and learning from that, even getting MRD’S own Tori Bee in for a

session during the summer. This time they were prepared to fight for it.

The Birds were off to a great start, Killamandjaro jamming first, getting lead, hitting

and quitting to put the first points on the board with Tink, Daria and Corey following

suit. It was a fast paced and tough game, each team equalling each others blocking

points with her non stop feet. We saw beautiful jammer footwork from both teams

and apex jumps apiece from Tink and Tori. Amazing tight walls all round and non

stop recycling of jammers. Just when they thought they were out, they pulled em back

in!! Just before half time saw a few power jams against The Birds which brought a

lead change and the points gap widening. Still within touching distance of each other

We get by with a little help from our friends.

Second half kicked off with MRD gaining lead a fair bit and putting up the points,

crushes! There was a power jam that saw the Birds kill the penalty time perfectly,

be doing it with one shoulder for most of it. It was absolutely text book. Seeing a team

Then the crap thing happened and our brilliant Tink got herself hurt. Broken hurt

legends and hobbled about not wanting a fuss. She found out later (much later! After

gin and chicken!) that her ankle was broken. Get well soon Stinky!

to the last jam, some last minute leads and quick call offs the game ended LRB 134

MRD 199. Very different to last year and a rankings boost for The Birds.

No doubt we’ll meet again next year. Until then why not head over to Preston on 4th

October to see our B team take on Preston Roller Girls.