Charity Partners: What have our Birds been up to for Macmillan?

In April we announced our charity partner for 2015 would be Macmillan Cancer Support. Ever since then our members have been up to all manner of exciting, daring and fun challenges, trying to raise as much as possible.

To kick everything off and get to know us, Lisa and Carl from Macmillan came to see us bout. Then Lisa chatted to us at our league meeting, giving us lots of ideas of how we could get involved.

Inspired by Macmillan’s Brave the Shave campaign, Harleen BringsHell immediately signed up to shave half of her head! Si from Si’s Barbershop brought his barber’s chair down on bout day and shaved not only Harleen’s head, but everyone else’s who volunteered and donated on the day! Harleen raised an enormous £541.66 for Macmillan. She choose to support the charity because they mean so much to her family. Harleen lost her mother-in-law to breast cancer and told us, “[Macmillan] were a fantastic support to her during her illness and right until the end as we were so far away. My mum was also diagnosed last year, and thankfully is on the road to recovery, but knowing that such a fantastic organisation exists is a comfort.” 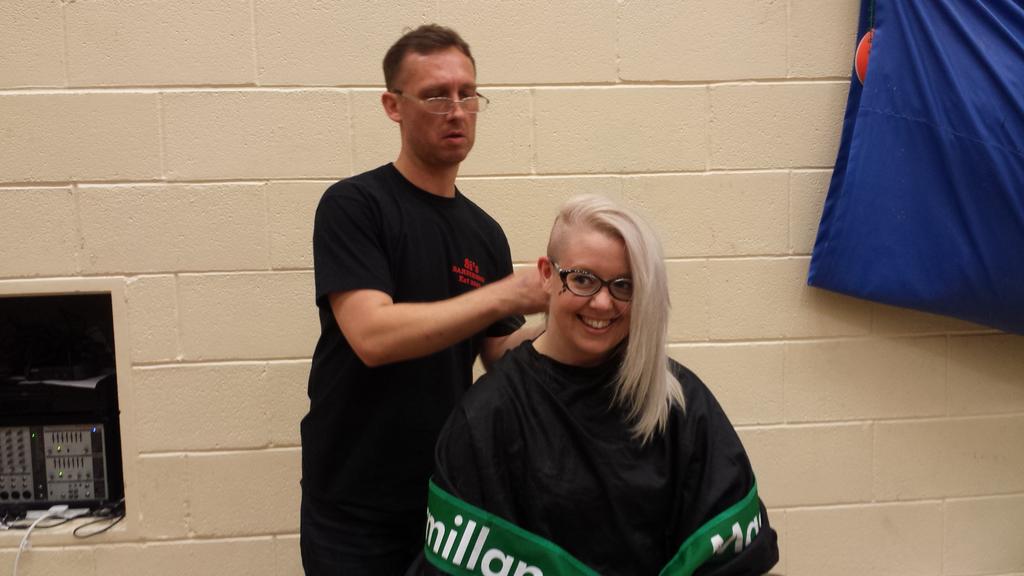 As well as countless skaters who braved the shave on the day, Killa Mandjaro’s son, Thomas, who had been growing his hair for years, had the whole lot shaved off! Our youngest volunteer was seven year old Daisy who was super excited about joining in and looked really cool with her under-cut afterwards. 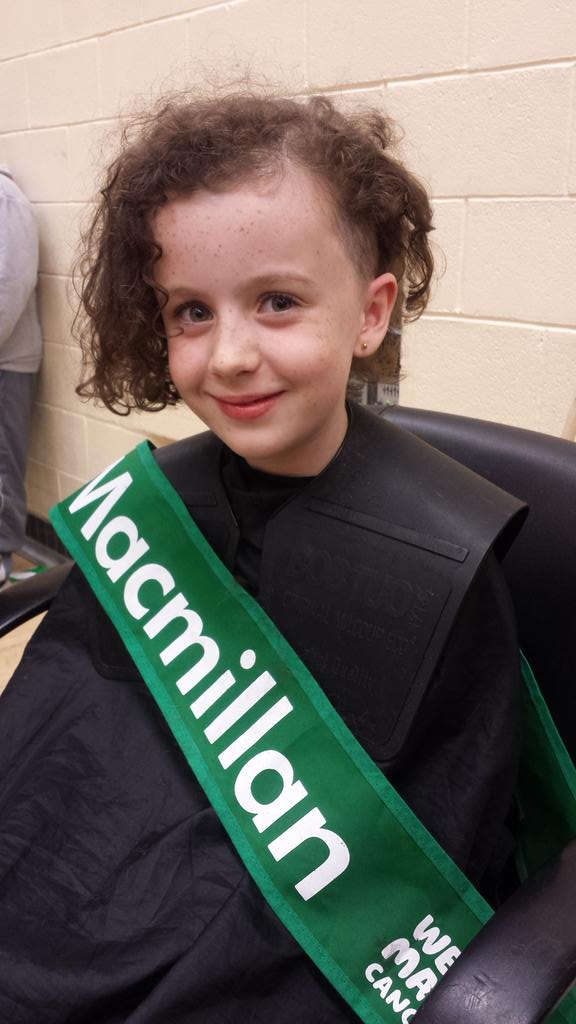 Next up was Spinderella, who ran Liverpool’s Spring 10k in Sefton Park. I asked her why she chose Macmillan and I think the last sentence perfectly puts into words how a lot of people feel about fundraising for a charity like them: “I chose to run a 10k because it seemed like a challenge – but an achievable one, and it would have the added bonus of helping my fitness for roller derby. It was fantastic to run for Macmillan because they were a brilliant support for my dad and uncle when they were ill. It’s hard to repay that, but every penny helps.”

Spinderella after her 10k run!

Last week Lula Bruise donned her swimming cap and took part in the Dee Mile race. With a water temperature of approximately 14 degrees, Lula said she thought this would be a great challenge because she loves wild swimming. Like so many of our fundraisers Lula lost someone close to her to cancer and said of Macmillan, “They aim to ensure that nobody faces cancer alone and also lobby for better cancer care, so definitely a cause worth supporting.”

All these fundraisers have been incredible so far.  Next up it’s Button Doom’s turn: she’s running the Liverpool Rock’n’Roll half marathon on Sunday 14th June and we’ll be out there supporting her by Princes Park Gates at the Macmillan cheer point. Button said, “Last year my mum was diagnosed with cancer and has fortunately made a full recovery – I want to help make a difference to people who are less fortunate and need more care and support from these wonderful nurses.” Button also bigged up her teamies, saying, “I skate for the Liverpool Roller Birds and Macmillan are our partnership charity for this year, so many of the girls are doing as much as they can to raise money for this excellent cause.”

Later in the year a whole gang of our Birdies (and some friends and family) are taking part in the Adrenaline Rush endurance obstacle course in Manchester.  This event directly benefits Macmillian with 25% of the entry fee going to the charity, and the participants are going to be raising even more between now and then through sponsorship. If you want to get involved there’s still time to sign up!

So far having Macmillan as our charity partner has been awesome. The support we’ve received from friends and fans has been phenomenal and Macmillan have been there cheering us on every step of the way. In return, on Sunday 14th June, we’ll be cheering on Lisa (Macmillan) in the Rock’n’Roll Marathon, alongside our own Button Doom. Come along and join us if you’re free and help us say thanks to Macmillan for being fab!

The following pages are still active on JustGiving if you haven’t got around to donating yet but still want to: